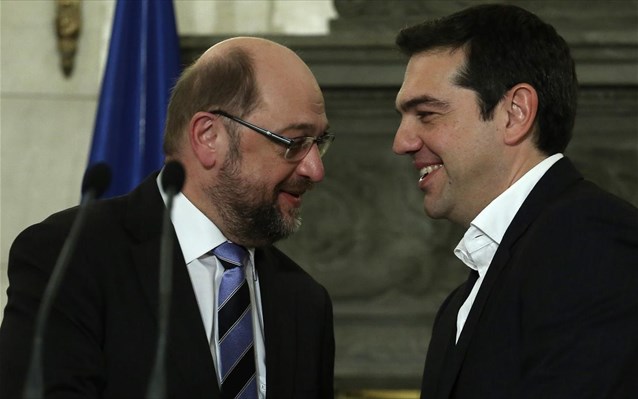 European Parliament President Martin Schultz who arrived to Athens today, will visit Lesbos with Prime Minister Alexis Tsipras on Thursday, November 5th, and will have the chance to witness first-hand the immense efforts of the whole island in rescuing and managing the  refugees influx, and the Greek coast guards', the residents' and the volunteers' hard work to get through the biggest European humanitarian crisis after World War II, with no up to now, europan funds.  ,

"The government's aim is to highlight in its meetings the role of Greece as a frontline country in defense of solidarity and humanism, on behalf of the whole of Europe," governmenent's sources have said announcing the President's.and the PM's visist to the island.

And this is not irrelevant with the Lesvos islands' candidacy  to be named the European Capital of Culture in 2021.

"We need to show the rest of Europe what we have learned and what crisis can truly offer to this continent,”Mayor Spyros Gallinos says. “We believe the biggest problem in Europe now is xenophobia and what we want to show to the rest of the European Union is that if we, as a small island, can accommodate refugees, European countries have nothing to fear.” 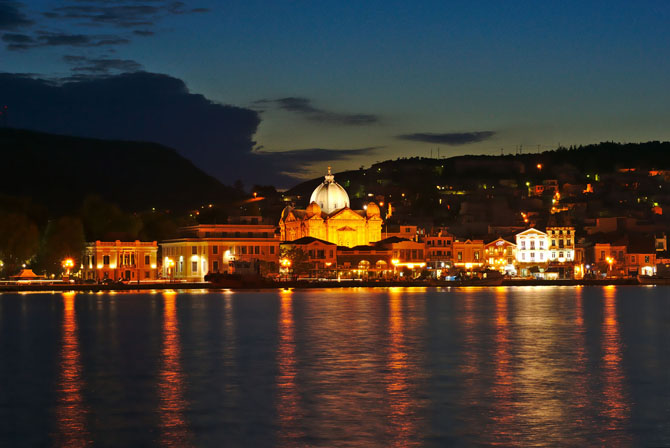 Lesbos has not received any financial support from the European Union whatsoever, as the mayor, has stated officially , adding that "What we do, we do from our own budget. The Municipaity's budget, and the one by one the isle's households budgets, that all feel devoted to help the refugees drama.

Lesbos' Crisis has reached its  harder stage a community in crisis can face, the stage of where and how to bury the growing number of drowned refugees .And this is not the only huge problem the island is facing fro the moment.

The plastic masses in the seas from abandoned life jackets on the shores has become a major envirenmental bomb as the Mayor says, as is also, primarily, the sanitation issue .  The needs of the island in showers, toilets and winter shelters are urgent to keep the island clean, for the residents, visitors and the whole Global Village, as is a plastic recycling plant..

But being proactive and looking forward  on this isle for its mayor, has not been limited  on the needs of chemical toilets only. Nor have  been hurt by the crisis,  this Eastern European borders' island's dreams to share its beauty and long in time culture with the rest of  the world and Euorpe. 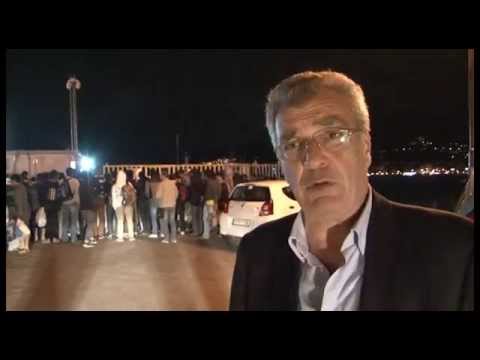 A visioner himself , Mayor Spyros Gallinos, managed to counteract  any fear or panic such a huge crisis could invoke in the community, cooperate on the best possible level with the Volunteers organizations and NGOs, and conduct international relations ahead of any European talk with his counterparts on neighboring Turkey.

Since the mid of summer and far before the crisis on the isle rose to its peak, Spyros Gallinos sent  to the  EU leaders the Lesbos Crisis Response Plan calling for an “immediate solution”.  The Plan's proposals have since then been far ahead  from where the official Greek and European talks have reached today.

The Mayor  of Lesbos was the first, and only one by that time, who dared to propose the crackdown of the smugglers' networks by asking the international community, the registration of the refugees masses to be held on Turkish borders, so as to permitt the registrated refugees to cross the sea officialy by the Turkish boats , which cost, to Turkish and Greek citizens today less than 5 Euros per ticket. That makes for a family of five persons , a cost of maximum 30 Euros for all, instead of 10000 Euros (2000 each) that still costs today

The proposals include also more registration centres and humanitarian aid on Lesbos, and  the potential of “safe and legal” direct entry of refugees to European counties  from Turkey and the Middle East, a scenario characterized  potentially " politically explosive" as the Independent wrote, explosive for the EU nations, but for which UNHCR officials on the island say it is the “only long-term solution” to the crisis, the article wrote . 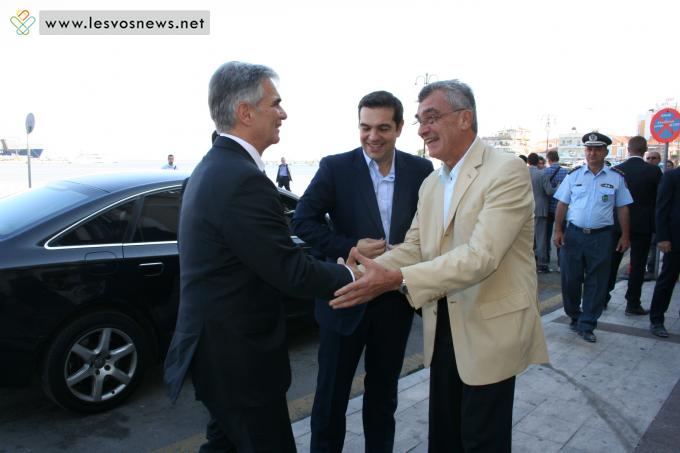 On October  6th, the Plan was personaly handed by Spyros Gallinos  to Alexis Tsipras, during the PM, andhe Chancllor of Austria  visit on the island. It was just on the moment  the European Plan for Joint Patrols in Aegean  with Greece and Turkey was attempted to be served to Greece, and Tsipras considered the Proposal more seriouslhy than anyone coukd imagine.

This is the official Lesbos Crisis Response Plan , on tis 3rd Section  concerning the European Level,as was offically sent by Mayor Gallinos since the mid of August to Jean Claude Juncker, and also, personally,   to Martin Shultz.

This is the official Migrant and Refugee Crisis Management Proposal

The third and most important level refers to the European Union itself. Migration is an issue that concerns each and every member state. European Union plays a pivotal role in this and should not restrict itself in measures of reception, accommodation and international protection to those who really need it.

The current objective of the Common European Migration Policy consists only of measures regarding the reception, accommodation and international protection. On the contrary there are no measures against the root of the problem, meaning the illegal smuggling networks. Furthermore, the equal distribution of the management cost and the migrant population is problematic because the number of refugees accepted by each member state is very small compared to the number of refugees entering Europe.

Smugglers gain a large amount of profit that can reach up to 2.000 € per person by organising the transportation of refugees and migrants.

The crossing to Europe is done in very dangerous conditions and as a consequence many refugees and especially small children die. All these lead to massive numbers of daily arrivals and as a result, we are having difficulties in planning our actions

• Implementation of countermeasures by special services. Fighting against every illegal smuggling network the majority of which are based in Turkey

Objective: Security of the E.U and selection of all those in need of international protection (screening process) Means:

• Installation of one or more Registration stations in Turkey.

Provision of first aid, registration and a safe departure issuing a normal price ticket and not an overpriced ticket from the smugglers.

• Selection of the convenient means of transport and direct departure to the final destination avoiding the exhausting marches through many European countries.

• Securing easier and more humane management of the large refugee population and proportionate distribution to every European member state.

• Lesvos Municipality and the Mayor Mr Galenos, have made investigative contacts with Turkish Mayors only to find out that they are very positive in cooperating and acting in common in order to manage the migration issue. They too are experiencing similar problems and wish for an international cooperation among city councils and Mayors.

• Proportionate distribution of the refugees among European Member States

• European Security through the thorough registration and identification procedure. Second check and screening possibility at the final destination

Lesvos Municipality is at the front line from the first days of the crisis. It includes practical proposals regarding the island of Lesvos and it expands to both National, European and International level. These proposals can serve as a crisis management model to other Eastern Aegean islands as well as other cities of the Mediterranean that are dealing with a similar situation.

Proactively as well, but also unfortunately prophetical at most, the Proposal Official Plan concludes

“ We believe that an ongoing crime takes place in the Aegean.”, is written on the conclusion of the official Proposal.

“ Thousand souls become victims of the smugglers that exploit them on their journey towards hope. During that journey, many of them, especially little children, loose their life trying to enter Europe.

It is the European Union’ s responsibility to put an end to this truly odious crime because otherwise both the International Community and the EU hold their guilt alive,for theses crimes, among all the common smugglers.”

But Europe didn't even hear. The Crisis Response on Europe's worst crisis of the last century, was totally absent, and the proof, are the dead bodies that are burried in the Aegean sea. It is an official total failure of a Crisis Response. At the end of the day this is what Crisis Management,, bottom line means. To avoid further victims. The tragedy scenario spoke by itself. And this is not  yet the end....