The President #Obamavisit2016 official details, by the @USEmbassyAthens. Amid #terrorist threats and attacks, the Greek expectations 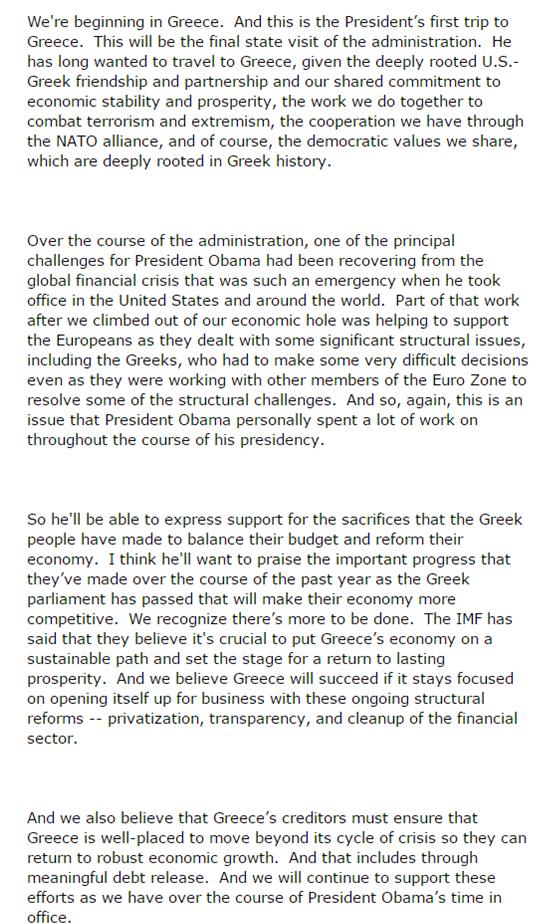 The symbolism is "hurt"

United States President Barack Obama’s scheduled speech at the foot of the Acropolis during his visit to Athens from November 15-16 is being canceled  due to safety concerns, Greek and American sources announced on Friday.

It was initially scheduled to  take on the most symbolic are of the world's democracy, on Pnyx hill,  with the Parthenon in the background, but is not considered a safe option anymore, after the  attack on the French embassy  on Thursday November 10.

A more secure area is now  sought for the historic speech. by the new Stavros Niarchos Foundation Cultural Center viewed as the best venue for the speech.

Besides the attack which already took place on the French Embasy area, the terrorist group, Conspiracy of the Cells of Fire, have openly threatened with a notice " to sabotage Obama visit " calling  on its supporters to answer to the U.S. president accordingly. In a posting on a radical left-wing website on Friday, the terrorist group called on anarchists to use Obama’s visit to “return a little of the violence we receive daily.”

Based on all of the terrorist attack to the French Embassy characteristics, the authorities estimate that it a subsequent act of terrorism is highly probable before the scheduled visit of the outgoing President in Athens.

The NOTICE AGAINST PRESIDENT OBAMA

"On 15-16 November is expected the outgoing US President US Barack Obama visit to Greece. The left government, which until yesterday was protesting under the slogan "Killer of American people" now will welcome the US President with honors. This fiesta of power will transform Athens into a city under military occupation by thousands of cops on the streets to enforce the validity of their power.The Anarchists, as the only internal eny power, can become the catalyst of the conflict so as to successfully spoil their fiesta ... We can return them back a little of the violence inflicted day to day upon us ... the violence of the economic crisis, of the wars in the Middle East , the killings in Palestine, fascism in Ukraine, in Africa, the violence of the concentration camps in the European Union .... But the organization,of the attacks and fightings, during the visit of US President, we do not just wish to stay limited to an occasional relief, waiting for the next demonstrationy, the next strike, the next war ...

The sabotage on the US President's visit may be the beginning of the creation of an organized anarchist movement, to attack in thenow-and-here for the destruction of the state and power...."

This message is in addition to planned demonstrations to the U.S. embassy in Athens on November 15, similar to protests held during a 1999 visit by then-president Bill Clinton that led to extensive violence. Just  to remind, today's Greek Prime Minister Alexis Tsipras, was a leading figure in the protest agains the Clinton visit in 1999.

Sources point to 3,000 policemen to be deployed in the area for the visit, as well as an additional 500 men from the U.S. guard. Some sources say that there will be 300 secret service agents, with 60 already in the city.

Furthermore, Air Force One aircraft will patrol the area, and there will be bullet-proof vehicles transporting the U.S. president. Attack against French Embassy a “show of force”, authorities say

High ranking officers of the anti-terrorist unit estimate the attack against the French Embassy, Thursday morning, was a well organised operation that was carried out by experienced members of an armed group.

So far authorities have not definitively concluded as to which particular group could be behind the attack, but after examining all the data collected are leaning towards a group called “Group of Popular Fighters”.

The fact that the two motorcycle riders chose to strike in one of the most heavily guarded areas in Athens, located across the Parliament ,  in close proximity to both the Greek PM’s Mansion and the Foreign Ministry was a symbolic move, according to the anti-terrorist unit.

“The upcoming visit of Obama and the November 17 Polytechnic anniversary present the perfect stage for armed groups to intensify their actions and make a show of force”, an officer told Protothema.gr.  undelining  that the fact the culprits hit a target surveyed with so many cameras and guarded by a riot unit , illustrate the attackers were not concerned about concealing their identity but of making a statement.

The footage examined showed the two terrorists managed to hide behind a moving bus to avoid detection by the riot unit police before throwing the hand grenade against the French Embassy.

The White House says the stop in Greece is Obama's final state visit before leaving office..

During his visit, Obama will meet with the president of Greece Prokopis Pavlopoulos and Prime Minister Alexis Tsipras. Greek debt, the Greek government’s economic program, the Cyprus issue and the migration crisis will be central to the talks.

According to the AP , Obama leaves Monday for a six-day trip to Greece, Germany and Peru. In Greece, he'll tour the Parthenon, give a speech about globalization and meet with Prime Minister Alexis Tsipras.

Obama in Germany will meet and have dinner with Chancellor Angela Merkel, and also meet with a group of European leaders that includes British Prime Minister Theresa May and French President Francois Hollande.

He'll attend an Asia economic summit in Peru, and while in Lima will also meet with Chinese President Xi Jinping and Australian Prime Minster Malcolm Turnbull.

The trip was imagined as a goodbye tour and a chance to bolster support for Obama's agreements on Iran's nuclear program, trade and climate change. but deputy national security adviser Ben Rhodes says Obama expects to face questions about how Trump's election affects those deals

During his largely symbolic visit, President Obama is planning to deliver a legacy speech from the birthplace of democracy.

He is expected to make an impassioned case for the merits of democracy,

European unity and security, and regional stability; at a time when all three are being tested by the rise of extremist parties and rhetoric.

Greece and the US support

Although he is expected to repeat these themes during his second stop in Germany, given that Greece is faced with the extra challenges of a debilitating economic crisis and an historic influx of migrants and refugees, President Obama’s stop in Athens is a particularly welcome sign of support to the country.

Under the Obama administration, the U.S. has stressed the geopolitical importance of Greece for the stability and security of the wider region. President Obama’s visit is a signal to Europe that the U.S. is putting a premium on keeping Greece as an integral part of the EU.

is also expected to make the case for an economic policy that puts Greece on the path of growth.

However, the visit will requires "careful" diplomacy, European institue article points out .And "delicate" we should note:

As Paul Glastris, who wrote the historic speech that President Bill Clinton made in Athens in 1999, put it,

President Obama “will have to thread a series of needles simultaneously..".

Greece-Turkey and the US

During the previous period of time ,Turkish president Recep Tayip Erdogan has publicly challenged the Treaty of Lausanne which set the modern-day borders of Turkey, including with Greece (Erdogan made particular emphasis to “our brothers” in Western Thrace, Cyprus., Crimea and Mosul). Worried, the Greeks hope to hear the U.S. president reiterate his support for the existing international treaties, writes the europeaninstitute.

Indeed, the fact that president Obama is ending his presidency with a visit to Greece contrasts with how he started his first term, when he visited Turkey in the hope of anchoring the country to Western values and interests.

Almost eight years after that trip to Turkey, the U.S. president is expected to make the case that the experience of Greece over the last few years is a lesson for all. 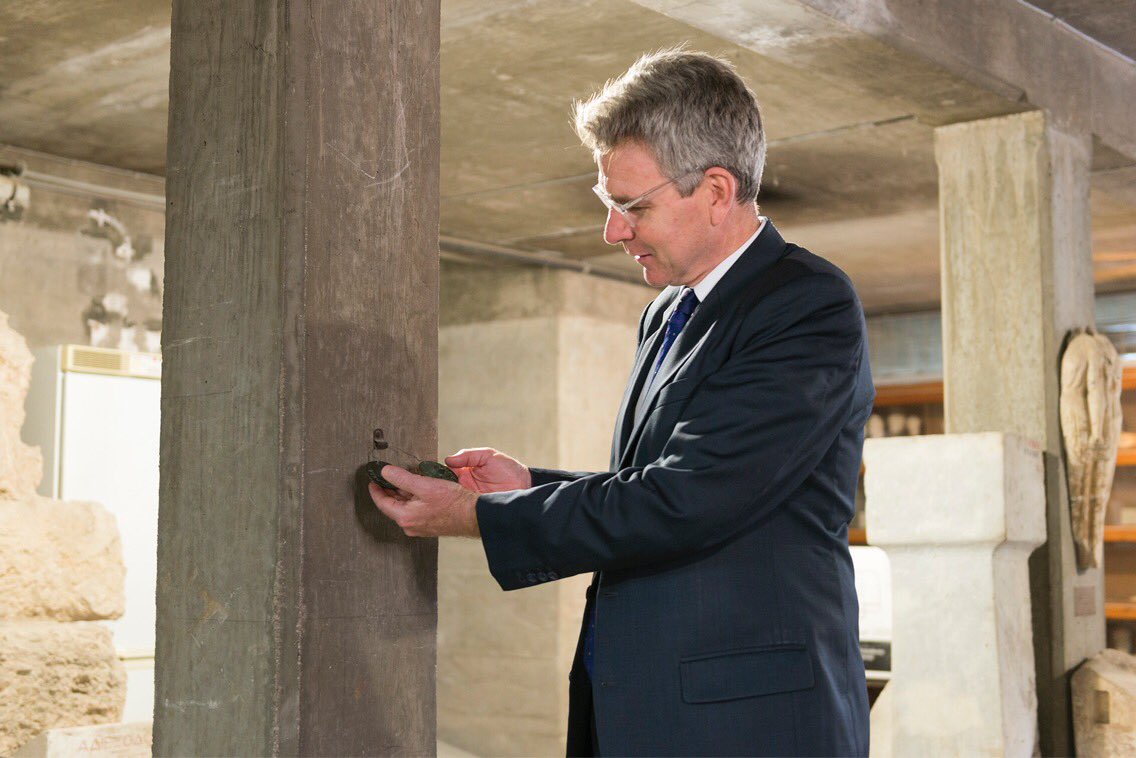 As the U.S. ambassador to Greece Jeffrey Pyatt put it last Monday, “Greece has faced enormous. challenges, but the democratic institutions of the country have functioned without interruption. This shows both the remarkable resilience of the Greek people, but it also demonstrates the enduring power of democracy.”

Despite facing extraordinary economic challenges and a lack of infrastructure to host them, Greece has also welcomed an increasing number of refugees and migrants without major security incidents. Finally, President Obama is expected to support further debt relief for the Greek economy

For the most part,  European Instiutue article comments, Obama administration has worked to deal with the Greek crisis and has weighed in at critical moments to ease austerity and keep Greece in the Eurozone.

The White House has tried to manage Greek expectations about how much (or how publicly) he will press the German Chancellor Angela Merkel to agree on further debt easing for the country., underlines the europeaninstitutearticle,

As his press secretary Josh Earnest put it,

“the president is not traveling to Athens to renegotiate the agreement between Greece and its creditors”.

Categories: Your Safety in Greece , Greece , Politics, Greece and the USA