Hope is on the way , was Alexis Tsipras slogan that brought him to power in January 2015

While two years later, Greek PM saw "light in the end of the tunnel", as he said on his New Years Eve message,- exactly as his predecessor Antonis Samaras did, precisely two Januaries earlier ,before his fall,- Greeks showed to be more pessimistic than ever about the country' s economic prospects and their own finances in the coming year, according to survey conducted on last days of last year

In his New Year message to the Greeks, though, Prime Minister Alexis Tsipras insisted to  describe 2017 as the year that "our country will take the great step forward" in the economy, society, and our national issues.

"We aspire that 2017 will be the year that the irreplaceable role of Greece in the international and European scene will be confirmed," he underlined.

The Prime Minister referred to the government's main targets for the new year, especially in the fields of economy, society, growth, investments stressing

"We may still have a lot of challenges ahead but for the first time we can see the light at the end of the tunnel", he said

"... If last year was the year of upheaval and survival for Alexis Tsipras, this year has been the year of the slow grind. As we near the end of 2016, Mr. Tsipras finds himself squeezed—by Germany and the International Monetary Fund, by Turkey and the refugee crisis, by his false promises and collapsing popularity—to the point of political extinction...."

Two years earlier: How Tsipras maximised all the hopes

On the New Year's Eve of 2014-2015 Tsipras had maximized the Greek expectations by promising a more fair, or at least, a more human package of life for the davastated Greeks, and this is what brought him to governance , for the first time in Greece's history that voted a leftist government to power

It was when Greeks were persuaded that leftist politicians would speak a "humanitarian voice" to Greece's creditors,  and of course, nobody would realise that it was a soviet type of politics the leftist governmenet was talking about, that would "please" in many cases creditors more than their austerity programs could do.

Have a look on our New Year's 2014-15 Greek to me ! Special Page to get an idea on the great expectations Greeks had when voting for Alexis Tsipras, so as to realize  how all the Greek hopes and expectations dissolved in the period of SYRIZA gov

Indeed, impressive are the results on Greeks' feelings by a  survey conducted on December 23,2016 by MRB for Real News, and published last week. The survey had found that 63 percent of Greeks feel that early elections are on their way in 2017.

The public opinion poll showed, impressively in numbers and words, that  the majority of the public are filled with worry, discontent and pessimism, when asked to  describe how they feel about Tsipras' government and current situation. In his New Year message also Alexis Tsipras, who had previously admitted to Greeks that he had "illusions" about how well he could handle the Greeks' rights towards the country's credditors,  stressed that 2017 will be the year that the confidence to the Greek economy will be restored adding that this is not just a wish but a realistic estimate.

"Confession of the  illusion exempts  from  any deceit" commented on January 2, 2017, to Spyros Haritatos Radio Show on Alpha fm, Stelios Ramfos, a writer and a thinker, well known for his precise political thinking and commenting

For last year, the year that has drained the lives of the Greeks  as never before , the PM Alexis Tsipras explained that Greece made significant progress .

The so much expected by the Greek PM, but so many times postponed by the creditors, conclusion of the second programme review, will be followed by the quantitative easing and Greece's return to the markets, when , and if it comes ..... 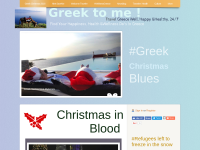