Epiphnay in Frozen Waters This Year in Greece

Undeterred by a cold front working its way across the country from the north and the generally unsettled weather, Greeks turned out in good numbers to celebrate the feast of the Epiphany on Friday, while many braved the freezing waters and dived after the cross during the various ceremonies to bless the waters, including in one instance an eight-year-old girl.

Despite strong winds, the ceremonies went smoothly on most of the Aegean islands, while on Rhodes a young woman called Eleni Karagianni  beat her male rivals to recover the cross from the stormy seas.

A notable exception was Iraklio on Crete, where the ceremony in the city's Venetian Harbour was cancelled due to a torrential downpour and held in the Cretaquarium instead. In spite of this, some swimmers dove into the harbour anyway and formed a symbolic human "cross" instead.

Three swimmers defied temperatures of -4C to dive after the cross in Lake Kastoria in northern Greece, four at Lake Polyfytos in Kozani, while 10 young Roma men observed the tradition by diving into the frozen waters of the Sakouleva River in Florina in light snowfall. The sixth of January; Christmas has officially come to an end and it is Epiphany, called “Ton Foton” in Greece.

This Feast Day is known as "Theophania" meaning; a vision of God, or, "Christ shining through"

Epiphany is one of the most meaningful celebrations for The Greek Orthodox Church, being third only, in rank, behind Easter and Pentecost.

In The Greek Orthodox Church, Epiphany, or, "Ton Foton" ( The shining forth) is celebrated as the announcement of Jesus Christ as The Messiah and as second person of The Trinity, at his baptism, by John The Baptist, in the River Jordan.

Another cause for celebration, in The Greek Orthodox Church, at Epiphany, is the fact that Christ's baptism, is only one of two occasions, when all three persons of The Trinity, showed themselves, at the same time, to mankind:

God The Father, speaking from the clouds, God The Son, being baptized in The River Jordan, and, God The Holy Spirit, revealed as a dove, descending from heaven.

Russian icon of the Theophany.

On Epiphany, The Greek Orthodox Church performs;"The Great Blessing of the Waters"

This ceremony, performed twice, once,on The Eve of Epiphany (A day of fasting), performed in the church, and again on the actual day, outdoors, with priests blessing the sea, rivers and lakes etc.

According the Greek Christian Orhtoox tradition the priest, surrounded by brave young men and boys, throws a cross into the sea, either from the harbour, or from a boat at sea.

Preparing to hurl the cross

The minute the cross leaves the priest’s hand, is the signal for them to dive into the freezing water, to catch it.

The lucky one, who finds and returns the cross is blessed by the priest;

As the cross is victoriously brought back, the priest releases white doves, as a symbol of The Holy Spirit.

This tradition is, carried out to remember and to celebrate, the Baptism of Christ, and to bless the waters.

An awful lot of blessing is carried out on Epiphany.

Fishermen, have their boats lined up, waiting for them to be blessed by the priest, once the daring divers are out of the way.

With a bunch of fresh Basil, dipped into a bowl of holy water and shaken around every room, he blesses the house and, anyone in his path, will have the basil shaken at them too This is also the day that the naughty little imps: Kallikantzaroi, who came out for the twelve days of Christmas, being afraid of holy water, scuttle back to their underground homes.

Since the day before Epiphany was a strict day of fasting, is the custom, of on arriving home after the celebrations, tucking into different types of delicious fried pastries.

Water blessed at Epiphany, or, Theophania, the "Theophany Water" is believed to different to Holy Water, in that its very nature has been changed and has become pure, honourable and praiseworthy.

The sixth of January, Theophania, in The Greek Orthodox Church, is the name day of: 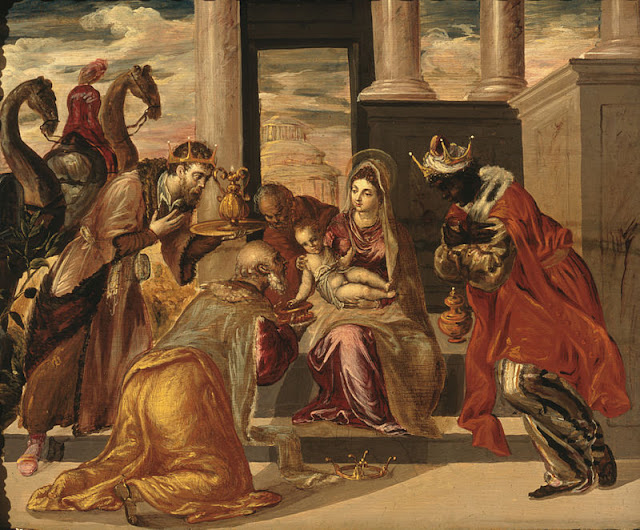 In the Western Church, 6th of January is also known as "Three Kings Day", a celebration of "The Three Magi" visiting baby Jesus.

Categories: Greece Cultural Heritage, Greek to You in Greece , Travel to Greece News