Five deaths from cold in Moria, three in the past week 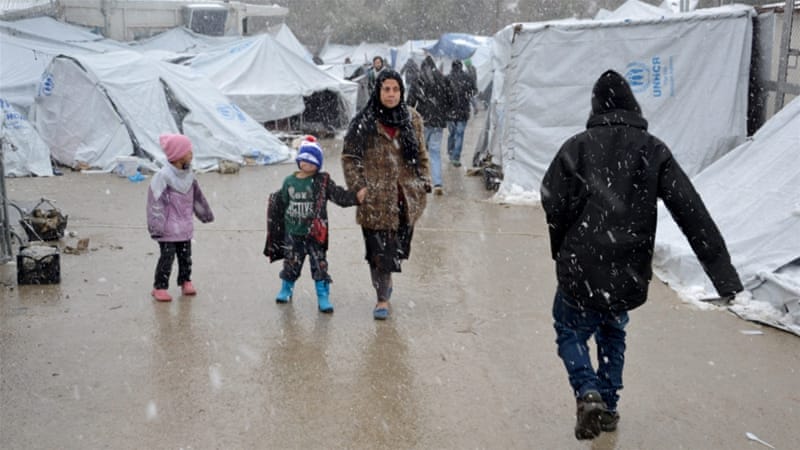 A third person has died in a week in the Moria refugee camp on Greece's Lesbos island, raising alarm about the grim winter conditions in overcrowded facilities that critics have denounced as deplorable.

The dead man is believed to be about 20 years old and from Pakistan, a police official on the island said. Another man who shared his tent was critically ill and taken to hospital.

The death at the island's Moria camp follows those of a 22-year-old Egyptian and a 46-year-old Syrian who shared a tent and died days apart.

Greek media reported they had inhaled fumes from a heater, but authorities would not confirm or deny that.

Greece's migration minister Yannis Mouzalas ordered an investigation into the deaths, the causes of which remain unclear.

"We don't know yet how they died, but we do know the thousands stuck on the Greek islands have been suffering horrendous conditions in the cold, trapped by the failure of the EU to offer protection and dignity," said Gauri van Gulik, Amnesty International's Europe director.

Could it be flu?

No one spoke of the possibility  of a flu-caused death , despite the numbers of deaths that  are rising in the general population during this period of time according to official data, and , definitely, no one of the authorities  discusses the absebce of any health protection and flu prevention guidelines,  that do not exist to inform,  at least, migrants and refugees for the  rapid spread of flu and respiratotry diseases  in overcrowded places s that could result in deaths.

In general, the leftist government of Alexis Tsipras, has been confronted by the "theory" that the reugee health condition and their immunity is strong, since  "they have survived throughout their hard journey ", as several ministers keep saying on the tv panels, so special prevention care on refugee poulations is considered in times of austerity , a luxury .....

"Children are particularly prone to respiratory illnesses at a time like this. It's about saving lives, not about red tape and keeping to bureaucratic arrangements,"  said Sarah Crowe , from UNICEF, the United Nations Children's Fund  "The dire situation right now is Greece."

The United Nations Children's Fund, which provides humanitarian assistance, said that the bad weather has “increased the risks of outbreaks of influenza and acute respiratory infections, especially among children under five.

“Thousands of migrants and refugees are trapped in freezing conditions in shelters that are ill-adapted for winter in Greece and the Balkans.”

the shameful Moria  camp exposed by the snow

At least 3,000 refugees and migrants are living in Moria, a hilltop former military base where conditions have deteriorated as they await, for months, word on their future.

The United Nations refugee agency and other international organisations have urged Greece to improve conditions at its overcrowded facilities.

Across Greece, more than 60,000 refugees and migrants - most from Syria, Iraq and Afghanistan - have been stranded since last March, in formal or makeshift camps, which US-based group Human Rights Watch has described as "deplorable and volatile."

As a mid-winter freeze gripped parts of the country earlier this month, thousands of asylum seekers endured sub-zero temperatures. Summer tents on Lesbos were weighed down by snow.

Four more deaths in the same camp so far

– On Saturday 28th of January a 46-year-old Egyptian passed away in Moria Hot Spot detention centre from hypothermia. He was staying in the same tent as another man who died only four days ago.

– Meanwhile the same day in Ritsona camp in mainland Greece a two-months-old baby was transferred to hospital in Chalkida due to a cystic fibrosis. The doctors suggested an immediate transfer to Athens special clinic for children, but the mother took the child back to the camp where it later passed away.

No medical help a reality

– On Wednesday 25th of January a 42-year-old refugee named Benjo Massoud, father of three children, had passed away in the overcrowded Hot Spot on Samos Island. According to Greek media the Kurdish refugee from Iraq had visited on Wednesday morning the camp doctor suffering from a pain in the chest. He reported to suffer from Diabetes and blood high pressure. A cardiogram was made and he got referred immediately to the hospital of the island, where he died while waiting to be examined. An employee of the camp said that the refugee had received already some days ago a letter of the doctor asking for heart exams in the hospital of the island, but he remained in his tent with his family the days that was very cold. Few days ago he had found by himself an empty container and settled in it together with his family. When he informed the camp managers, they just registered the transfer to the prefabricated house. The refugee had arrived on December 7th and went through first reception procedures without anyone noticing any heart problem.

Already back in October Medicines Sans Frontiers reported the inadequacy of the system to screen new arrivals for vulnerability in the Hot Spots of the Aegean.

-One day before, on Tuesday the 24th, a 21-year-old Egyptian refugee was found dead in his tent by a friend in the Hot Spot in Moria on Lesbos Island. The cause of his death is still unknown. While reportedly his death was caused by the kerosine heaters gas he had inhaled while trying to keep himself warm. According to a lawyer who took part in a UNHCR Protection meeting, they got informed that the young Egyptian had been autopsied. It was described that, he was a perfectly fit and healthy individual. They were also informed that he had not yet passed away when the doctors arrived.

– It was not the first death of this winter in Moria. At the end of November 2016 a a 60-year-old woman and her 5-year-old grandchild died in a fire inside their tent while the woman was cooking dinner.