An "epidemic" washing over other European countries may see the end of the EU, warned Yanis Varoufakis, Greece’s former finance minister in a fiery interview/ to be shown by Al Jazeera TV on Sunday February 12.

Seven years after European Union bailed Greece out in controversial circumstances Yanis Varoufakis said there is an “epidemic” among countries using the single currency, with Italy the next to fall foul of Brussels’ economic malaise.

"The right question is: Is there going to be a eurozone and the European Union in one or two years’ time?" asks Varoufakis, who served as finance minister for five months under the Syriza government, reminding to the Greeks and the international audience, exactly the words of Ted Malloch, Donald Trump’s choice for US ambassador to the EU, in his interviews earlier this week to Greek TV channels,  that  "Eurozone might not exist in less than 16 nmonths form now, and that Greece would be better off outside the eurozone"

“When you allow an epidemic to start spreading from a place like Greece to Spain to Ireland, then eventually it gets to a place like Italy.”

Italy is already on the way out, Varoufakis said  adding that   Brexit would “speed up” the break-down of the bloc - before making a dig at Jeremy Corbyn.

He said: “The way we’re going I cannot see Italy remaining in the eurozone for very long.

Yanis Varoufakis said Brexit would lead to the disintegration of the EU. The  the ongoing divorce of Britain from the union, Varpufakis said , could prove to be Brussels death knell.

“The European Union is not a club. It’s a lot more than that, and it is at an advanced stage of disintegration. Brexit is going to speed up that disintegration.”

The 55-year-old, who served as finance minister during Greece’s debt crisis in 2015, went on to accuse the EU of attempting to destroy one of its own states.

He said: “They were only interested in crushing our government. Why? Only because they wanted to use this crushing of our government, of the Greek Spring, of the Athens Spring as a morality tale by which to frighten, to scare, Spaniards, Irish, Italian, and ultimately French voters from getting ideas that they can elect a government that will contest the powers of the Troika.”

The country’s European creditors are going after the “little people” rather than “corrupt oligarchs”,Varoufakis had said also talking  to BBC Radio 4’s Today program on Thursday .

"The only reason why we keep talking about Greece ... is because it is symptomatic of the architectural design faults and crisis of the eurozone." 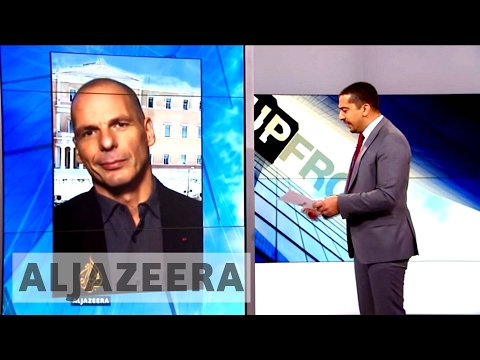 Find more on our Updated HomePage