The terrorist's health that detonated, like his bomb, in the Health Minister's hands

The "peaceful"  negotiation the Greek Health Minister tried to have with the antiauthoritarion anarchists who invaded and occupied his office last week  turned out to be the bomb that detonated in his hands, when their discussion  was later aired on the anarchist's blogs,  by quoting the misnister  saying that he, personally signed for the release,  to and sentence at home due to impaired health  of the Greek top terrorist Savas Xiros who , by Greek "tragical irony" had been cought 15 years earlier when a bomb detonated in his , the terrorist's,  hands  ....

The squatters were furiously demonstating for the unbearable health conditions in the "Hellhole" as the Hospital of Kordallos, the country's biggest prison, is being dangerously threating the prisoners' lives, as repeatedly has been dennounced. One hundred deaths in the last five years, they shout,  one every month...

It was when the Greek Health Minister Andreas Xiros, trying to ease the squatters' anger, claimed that a lot  has been done under his government, that tried by law to decongest prisons' hospitals , and many, he said, with impaired health are already serving their term at their home , that the anarchists complained of , specifiaclly, terrorists' Savas Xiros case who continues to be held despite his disability,

"I have signed a text when I was a trade unionist clinician for the release of Savas Xiros , and  you know that"

Accidentaly, and by tragical irony as well, Andreas Xantos is the Health Minister  who on the contrary with his predecessors , almost never gives press conferences to the Medical reporters, and of course, no one during his days , passes free  the door of Health Ministry , who used to be open to the  public unstoppably  during  the previous 25 years at least  . It is out of the question for the last two years of  Andreas Xanthos reignance in Health Ministry ( as Deputy Minister for the first year) that any single meeting in his office with Health authorities  has been covered by TV channels or press reporters.

But the anarchists did it their way . They taped all their conversation , and then aired the material  . And even this Ministry of Health could not say a word to them cause they are anarchists, simply Nothing is done by the book , as the leftist governement comrads very well know, since the times that their "revolutionary" beliefs and ideoogy was lying close to the anarchists, as so many times SYRIZA is accused of .

The Minister of Health addressing the squatters, though, did make clear , as it is shown on the video,  that  releasing by home sentence terrorist Savvas Xiros , was his  "personal opinion" 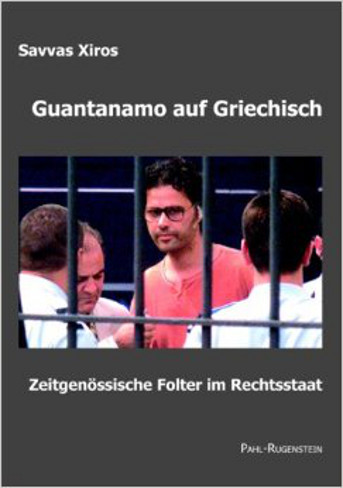 The law to "release at home"  Savvas Xiros

Savvas Xiros, a member of the“Revolutionary Organization 17 November”, who is serving a life sentence (x5), was arrested in 2002 after suffering serious eye injuries in a failed bomb attack. He is also said to be suffering from multiple sclerosis.

Tsipras government drafted a law in April 2015, in  less than three months after its first election,  which was allowing Xiros’s release to serve his term under home arrest, after 13 years in jail, while he is  serving five life sentences.

By so doing, Syriza hoped to reassure its internal opposition that it still loved the Revolution, Greek and the international press had commented by that time .

Xiros , whose accident by the  crudely made bomb that detonated in his hands in the port of Piraeus in June 2002 led to his arrest and the unravelling of  "17 November" terrorist group,  is considered central figure  in the terrorist organization,  whose victims included the CIA station chief in Athens Richard Welch, following the collapse of military rule in 1975.

Xiros personal appeals to be set free on health grounds had been rejected by the courts until the law that early in its governance passed Tsipras' leftist governmenet passed early in its governance  . He had been also implicated, as was revealed after his arrest, in the deaths of two senior Athens-based US representatives. He is convicted of murdering the US defence and naval attache to Greece, Captain William Nordeen, with a car bomb in 1988 and killing US air force sergeant Ronald Stewart, with a bomb planted outside his home, in 1991.

The US ambassador to Athens by 2015, and known to be a storng Philhellenist, David Pearce, had  issued a stern warning to the, newly by then elected, leftist government of Greece, over its proposed legislation which would enable the release of the key terrorist convinced to five life sentences as early as almost just a decade, stressing that  the passage of a controversial prison reform bill would be seen as a “profoundly unfriendly act”. The US Ambassador's intervention was characterized the most vigorous public U.S. Embassy intervention in Greek politics since the Athens Olympics in 2004.

“If Savvas Xiros – or anyone else with the blood of American diplomats and US mission members on their hands – leaves prison, it will be seen as a profoundly unfriendly act. There is no place for convicted terrorists in civilised political discourse or back in Greek society. They are violent criminals and they belong in prison, nowhere else.”,D.Pearce statement official said

The US secretary of state, John Kerry, had well personally voiced voiced concerns to the new=back then-  Greek government

But the Greek parliament brushed aside the US pleas and adopted the law  with the support of the leftist ruling party Syriza.

State Department spokesperson Harf  emphasided by official statement  that Xiros “would be in a position to resume terrorist plotting and planning.”

In the short-term, U.S. anger at the home confinement of Savvas Xiros will translate into an increase in the political cost to the Obama administration of continuing to treat Greece as a valued ally. If the Tsipras government continues to seem aggressively ambivalent about its desire for rescue within that system, the U.S. government will watch from the sidelines as it sinks, the Huffington Post wrote in April 2015, after the US Ambassador;s intervention.

"Refreshing the memories" under Trump Administration

The leftist government law as a humanitarian measure, has helped till now  the release of quite a lot,  the minister appeared to have said, prisoners with impaired health damage to be freed from jail early and be placed under house arrest. Buit it;s the special timing that this Health Minister's "personal position"  of humanitarian argument makes sense.

After two years in governement , and the refusal of this governement's Health Ministry  to pass even the "health screening"  refugee health card to all  incomers refugee and migrants, as the GreekCDC had prepared  as a shield for the Refugees Influx  for more than a decade in order to protect from the total No Border Control that the Gate to West finally reached finally, it is in this moment that the Health Minister was exposed to his humanitarian "sympathy for the health of the top Greek terrorist , that the West and specially the US new President, set up their defence to terrorism,  as never before  .

And this in Greek Tragedy is what makes Tragical Irony  .....

The video, shooted and aired by the anarchists group . Minister's "peaceful negotiation"  with anarchists

Categories: Your Safety in Greece , Greece , Politics, Greece and the USA