Greece is creating an international body of the local government for the Promotion and Development of Health and Medical Tourism in Greece which has been announced at the Special Thematic Conference on “Health Tourism: Engine of the National Economy’s Growth & Turning Greece into a top touristic destination all year round" in Ithaca, on Friday , May 26.

George Patoulis, President of the Central Union of Municipalities of Greece, President of Athens Medical Association, and Head of the Initiative of Health Tourism in Greece as well as President of the Global Institute of Greek Medical Scientists in Greece and Abroad, which is also created to support Greece’s Health tourism initiative, announced the creation of the International Health Tourism Center of Greece which "aims to become the Ambassador of Greece's Health and Medical Tourism by the support of Local Government in a leading role"

Speaking as the President of the Central Union of Municipalities of Greece, George Patoulis described in his speech at the conference 's opening ceremony, how the International Health Tourism Center is designed to meet the national need for an integrated master plan for the development of Health Tourism in the country. The International Health Tourism center will record and map , step by step , on behalf of Greece's Municipalities, the competitive and comparative advantages of the country on Health and Medical Travel and propose on national level the specific policies needed for the promotion of Greece's national goals in this area .

George Patoulis emphasized the importance of cooperation of all stakeholders of Public and Private Sector of Greece relevant to Health and Medical Tourism, for the success of the project that will highlight Greece's strong potential in the field of Health Tourism.

The Conference in Ithaca island is the fourth stop of the international Awareness campaign which has been launched this year worldwide, starting form the biggest cities of the world where the Greek Diaspora is found, and concluding this round this time in Ithaca, the thrylic island of Odysseus of Homer's Odyssey

Health Tourism find its Ithaca, many of the speakers said, among them the Minister of Shipping and Island Policy P.Kourouplis, the President of PASOK and Head of the Democratic Compatriacy Fofi Genimata, the Mayor of Ithaca island D. Stanitsas, the Eminent Metropolitan of Lefkada and many more

The conference, which is organized by the Central Union of Municipalites of Greece was also by Spyros Galiatsatos Deputy Governor of the Ionian Islands, Mayor of Kefallonia Al. Parasis, Emmanouil Konsolas Domenical of ND Tourism, Aphrodite Theoptetto, Member of the Prefecture of Kefalonia & Ithaca, Christina Starakas Vice-Governor of Western Greece, Giorgos Tzillas General Secretary for Tourism Policy and Development, Florian Bodog, Minister of Health of Romania and Nicolae Banicioiu, Former Minister of Health Romania

Concerning the coming steps for the development of Health Tourism and the creation of the International Health Tourism Center, the President of the Central Union of Municipalities of Greece pointed out that the aim is to record the existing infrastructure and indicate which shortcomings should be addressed locally, so that the benefits of the development of health tourism should be shared not only in the cities that currently have the infrastructure to support the project, but across the country.

"Health tourism will be one of the most important pillars of the Greek economy for the coming decade," he said , reminding that national development should be based on prior local development for this aim, as the Central Union of Municipalities of Greece, KEDE, has repeatedly pointed out . George Patoulis also stressed out the importance of the contribution of Greek entrepreneurship to this effort so as to enhance Greece's extroversion and attract new investments in areas with High added value ".

Regarding the International Health Tourism Center, G.P. pointed out that the aims of center include:

• Helping the development and promotion of Greece as a credible and attractive destination for health tourism.

• Encouraging and supporting the development of regional and local health tourism destinations in the form of clusters - clusters.

• Encouraging and supporting the development of New Business in order to reach a wider market through the use of Health Tourism and its sub-disciplines.

• Encouraging and supporting the Healthcare Providers within Health Tourism and its sub-branches.

• The provision of supportive services and products.

• Adoption and application of anonymous electronic records of domestic and foreign patients (ie permanent residents), for the aim of studying and setting policies to achieve goals through real data.

• Presentation of official data in international forums, organizations and conferences. 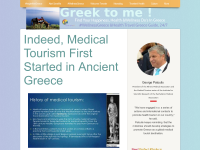