New seismic vibration 4.4 Richter was recorded at 07:35 on Wednesday morning in Lesvos  in less than 48hours after the disastrous earthquake in Lesvos on monday, at the same epicenter, the seismologists said .

The vibration was centered 13 kilometers south of Plomari, in the sea area that gave the earthquake.

Authorities in Greece have declared a state of emergency on the island of Lesvos after the  Monday June 12 fatal earthquake,  that has left one woman dead and more than 800 people displaced  and  totally ruined an old stone vilage in Lesvos, Vrisa .Officials from the island’s regional government  said on Wednesday  homes in 12 villages in southern Lesvos had been seriously damaged or destroyed, and 150 homes have been declared completely innapropriate so far .

The mostly elderly residents affected were being housed with relatives, in hotels or at an army-run shelter, while 60 people stay at the tents overnight.. 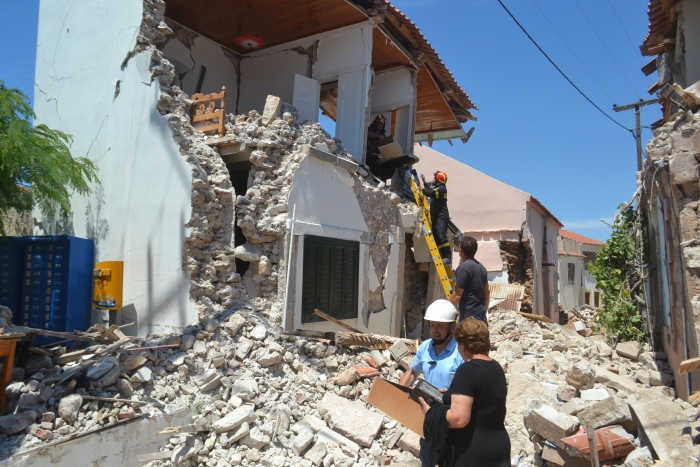 But  still the nightmare cannot be over. Danger of a new , even more disastrous earthquake is already expressed officialy by the county/'s top scientists after the assessment of the earthquake's rift that has been energized on an area that has gone through the same fatality 172 yeas earlier .

The director of the Geosynthetics Institute of the Athens Observatory, Akis Tselentis, appeared cautious talking on Ant1 tv in the first 36hs after the 6.1 Richter that occurred on Monday in Lesvos.

"I'm not convinced that it was the main earthquake," Akis Tselentis said on Wednesday morning

"It may take a few days and then suddenly we might  see a 5.8 or a six again," added Tchelentis.

"The rift passes south of Lesvos, it starts northwest and has south-east direction, it is 45 km long. The southeastern part, the front, has been excited. There is a possibility that we have activation in the back track. There is a worse scenario, we have a shift in the central part of the island" Tchelentis added. .

According to the professor of seismology in the the Aegean University NIkos Zouros, the earthquake is a copy of the earthquake of 1845. From the same fault, of the same intensity and with a tragic-again a woman dead. Based on the earthquake, at least 2-3 aftershocks above 5 R are expected. It is not considered possible to move the focus to affect Vatera.

The greater epicenter area got more than 100 aftershocks but luckily only a limited number were felt by the people. Panic has been unavoidably spread throughout the island.

State-run radio in Greece said hundreds of residents left buildings and waited out in the street in Lesvos’ capital, Mytilene, on Tuesday, but also Wednesday, as rumours spread about a new , potentially more disastrous quake, predicted by seismologists to occure on Wednesday afternoon The Greek Seismologic Institute, denied such information release, noting though that no possibility of a new srong quake could be excluded for the coming hours and days

The powerful 6.3-magnitude earthquake occurred south of Lesvos between the NorthEastern Aegean Greek islands Lesvos and Chios, but was felt as far as Instambul

The quake struck in the Aegean Sea at a depth of seven kilometres and 10 km far from the south coast of Lesvos in the area of Plomari  at 3.28pm Monday local time.

“Tens of buildings have collapsed and roads are blocked off,” said Marios Apostolides, the divisional commander of the fire brigade.

The 44 years old woman, was crushed by the roof of her home and died, the island’s mayor announced on Monday evening.

At least 10 people were injured in the village of Vrisa, Greek authorities said.

“We are advising residents in affected areas of Lesvos to remain outdoors until buildings can be inspected,” senior seismologist Efthimios Lekkas said.

Senior Greek government officials, seismologists and response teams  have headed  from Athens, to Lesvos to assess the damage.

Buildings were damaged also in the  village of Plomari, on the northeastern Greek island of Lesvos, the place known worldwide for tiss ouzo production .The mayor of Plomari, Manolis Armenakas, told ERT state television: "We have damage to several buildings, old and new". Especially the damage sustained to new buildings is somewhat strange as building codes are very strict in this area of the world and houses should be able to resist even bigger Magnitudes."

Tremors were also felt in densely-populated Istanbul and in the western Turkish provinces of Izmir, but  Turkey’s emergency management agency said there were no reports of casualties and has dispatched emergency and health teams,Private Dogan news agency showed residents in western Turkey leaving buildings.

This year alone, Turkey’s western Aegean coast was hit by several earthquakes of up to 5.5 magnitude, which brought back memories of past deadly earthquakes.

On August 17, 1999, a huge earthquake measuring more than 7.0 magnitude near the city of Izmit devastated vast zones in the country’s densely populated northwestern zone, notably around Istanbul, killing over 17,000 people.

Categories: Travel to Greece News , Your Safety in Greece , The Unspoilt Lesvos