Indeed, the special Greek Coffee, has been proved to promote heart health protect against heart attack and lead to longer life?

A groundbreaking study shows that to reap the most potent heart-health and long-life rewards of coffee, you should opt for super-powered Greek coffee.

A recent study published in Vascular Medicine featured elderly residents from the Greek island Ikaria. Those who drank boiled Greek coffee daily had better overall cardiovascular health. That’s saying a lot when it comes to Ikaria, where people live well past 90 far more often than they do elsewhere in the world.

The Greek Secret of Coffee

Two things make Greek coffee superior: its concentration and preparation, both of which deliver more of coffee’s known protective compounds directly into your cup.

First, Greek coffee is not brewed, but boiled, an ancient method developed in Yemen long before filtering was ever used. Not only does boiling coffee create a rich, creamy foam called kaimaki (kaee-MAH-kee), it also extracts far more nutrients from the coffee beans than filtering does.

Because of these distinctions, Greek coffee is richer in the heart-healthy compounds coffee is known for: chlorogenic acid, polyphenols, and other lipid-soluble substances.

Greek coffee has been shown to…

In the Ikaria study, led by profesor of Universy of Athens, Christodolos Stefanadis , it was found that those who drank Greek coffee had healthier blood vessels.

In addition, the researchers discovered that Greek coffee protects against endothelial cell dysfunction. This is a specific type of heart disease that affects the endothelial cells that line your blood vessels, and it’s on the rise. Worse yet, it’s especially deadly for women.

When the endothelial cells become inflamed, arterial plaque can latch on and build up inside your blood vessels, eventually triggering a heart attack.

Coffee is an important part of Greek culture. Ikarians consume about 3 to 5 small demitasse cups a day. Each Greek serving contains about 100 mg of caffeine—about the amount you’d get in a cup and a half of American coffee.

Other caffeine studies have also repeatedly shown the antioxidant properties of coffee that have also proven to be cancer fighting .

Here are just a few of the studies that support the notion that caffeinated coffee reduces risk of certain types of cancer. 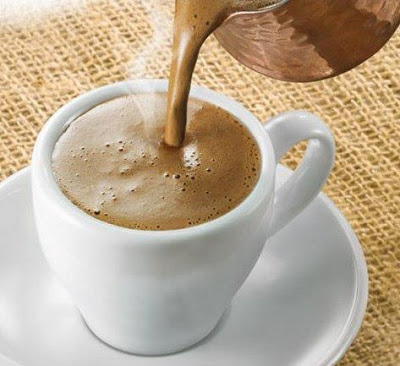 Categories: Health Travel &Travel Health in Greece , Greek to You in Greece , Recipes you will only find in Greece