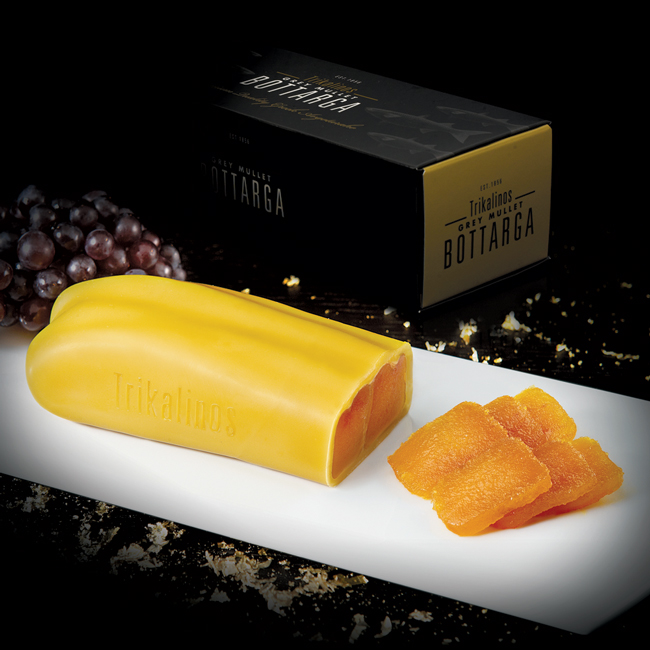 The Trikalinos Grey Mullet Bottarga (Avgotaraho) is considered by numerous culinary experts as the ultimate authentic Greek delicacy and the holiday season is the best time to taste, enjoy, and indulge in this special treat.

Research published in the Journal of Agricultural and Food Chemistry, showed that Trikalinos Bottarga is a food of high nutrition value, providing significant amounts of protein, fatty acids and vitamins. It has a healthy lipid profile in terms of omega-3/omega-6 ratio, while the antiplatelet reactivity of its oil indicates a putative antithrombotic potential, which was verified recently in collaboration with the Greek Institute of Pasteur, in animal experimental model

Recent research (titled: Chemical Composition of Greek Avgotaraho, published in Journal of Agricultural and Food Chemistry), indicates that Trikalinos Avgotaraho contains vitamins, protein, selenium, iron and is rich in ω3 fatty acids. The consumption of 100gr of Avgotaraho gives to the body 4,93 gr of ω3 fatty acids. Further to this, a second -in vivo- research conducted by Pasteur Institute (indicating that Trikalinos Avgotaraho as a dietary supplement may have an antiatherogenic potential), was presented on a Satellite Talk at the “15th International Symposium on Atherosclerosis and associated risk factors”, that was held on 25th & 26th November 2011 and which was organized by the HELLENIC HEART FOUNDATION.

The Trikalinos Grey Mullet Bottarga (Avgotaraho) is a delicacy of cured Grey Mullet Roe, recognized as the best roe for Avgotaraho production, natural without preservatives, with high nutritional value and a pleasant long lasting finish.

• Its standardized production techniques properly balance the salting and drying processes to deliver higher moisture and lower sodium in the final product.

• It is coated by natural bee’s wax, which sufficiently preserves the product and its delicate taste during its shelf life, despite the low sodium .1.

Since 1856, Trikalinos Family has produced and sold Grey Mullet Bottarga