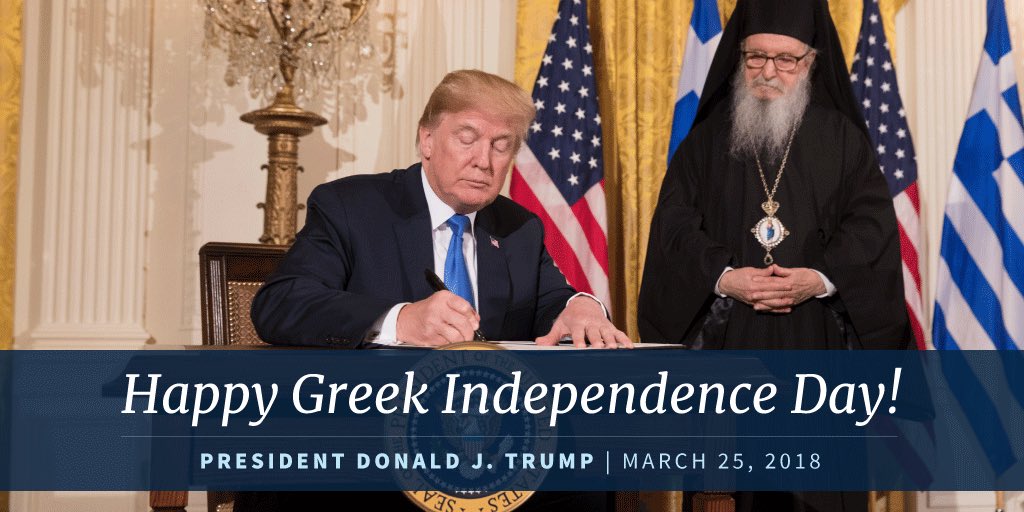 President Donald J. Trump Proclaimed March 25, 2018, as Greek Independence Day: A National Day of Celebration of Greek and American Democracy,  as released by the White House and whas twitted by @realDonaldTrump on March 25

"On this celebration of Greek Independence Day, we reflect on the common bonds of history and heritage that connect the United States and Greece. Our nations share cultural, economic, and defense interests, but the foundation of our abiding friendship is our unwavering commitment to liberty and our shared love of democratic institutions.

As the cradle of Western civilization and the birthplace of democracy, Greece has a rich and glorious heritage, resplendent in its influential contributions to literature, philosophy, and science. The ancient Greeks fostered the timeless ideal of human liberty, which inspired our Nation’s Founders as they drafted our Constitution and established our Republic. The legacy of ancient Greece carries on today, as liberty continues to serve as a beacon of hope to all who long for a better life.

It was an honor to welcome Greek Prime Minister Alexis Tsipras to the White House last year. His visit underscored the importance of our bilateral relationship and our ongoing strategic cooperation on issues such as law enforcement, counterterrorism, and matters of defense, energy, commerce, and trade. Greece continues to meet its NATO obligations on defense spending and serves as a gracious host for our naval forces at Souda Bay. Our Greek-American partnership is strong, and we are grateful to have such a tremendous ally and friend in Greece.

Our nations continue to expand our economic and commercial ties, creating jobs and opportunities for investment and trade on both sides of the Atlantic. This year, the United States is proud to serve as the honored country at the 2018 Thessaloniki International Fair. This historic business and trade exhibition will showcase American technology, enterprise, and innovation, and will further enhance the partnership and cooperation between our great nations.

In 2018, we also celebrate 70 years of Fulbright Greece, a program of educational and cultural exchanges between the United States and Greece. Fulbright Greece, the oldest Fulbright program in Europe, is the flagship international exchange program sponsored by our Government. Since 1948, the program has awarded grants to more than 5,500 Greek and American citizens to study, teach, or conduct research, enriching both of our countries.

The United States and Greece have an enduring bond based on mutual respect, shared values, and an abiding commitment to freedom and sovereignty. More than 1.3 million Americans claim Greek origin. The Greek-American community has made countless positive contributions to our Nation and has played a vital role in maintaining our strong relationship with Greece. On this 197th anniversary celebration of Greek Independence Day, we honor Greece as a strong, faithful ally and valued partner in promoting peace, liberty, and prosperity around the world.

NOW, THEREFORE, I, DONALD J. TRUMP, President of the United States of America, by virtue of the authority vested in me by the Constitution and the laws of the United States, do hereby proclaim March 25, 2018, as Greek Independence Day: A National Day of Celebration of Greek and American Democracy. I call upon the people of the United States to observe this day with appropriate ceremonies and activities.

IN WITNESS WHEREOF, I have hereunto set my hand this twenty-second day of March, in the year of our Lord two thousand eighteen, and of the Independence of the United States of America the two hundred and forty-second.

“All around us here in the United States, we see the profound influence of Greek culture, art, and philosophy,” US Presdient Donald Trump said, welcoming members of the Greek-American community and guests to the White House for the yearly White House commemoration of Greece’s Independence Day and  called Greece's culture and history "a common heritage", for which, he said, "we will face any challenges together in the future "

“In the Federalist Papers our founding fathers consulted the wisdom of the ancient Greek city-states when writing our own Constitution.”

President Trump spoke of national landmarks found throughout the United States capitol and the obvious influence of greek architecture in their construction. He then honored all Americans of Greek descent and their influence on America today.

“In celebrating Greek Independence we honor this influence and we remember our common heritage.”

“We renew our commitment to the values and principles that make us who we are,” Trump said during his remarks. “We stand together for freedom and justice and democracy today and for all time,” US President Donald Trump said.

“We take renewed confidence that whatever challenges we may face any time in the future, we will face them together… as members of a great community of nations,” the US leader said.

Greek independence day is celebrated on March 25, marking the country’s 1821 start of the War of Greek Independence.and its celebration in the White House is established as an ongoing tradition since 1987.

“After almost four centuries of foreign rule, brave Greek patriots fought to reclaim their freedom, their sovereignty, and their right of self-determination,” Trump recounted.

“The Greek fight for independence enjoyed an outpouring of support throughout the western world.”

Archbishop Demetrios, in his speech  expressed his appreciation for the White House event. He said that the invite each year at the Greek Independence Day commemoration shows that not only Greek Americans are honored, but the “spirit of freedom and human dignity.”

Archbishop Demetrios, in his address, also called on the US to support a number of matters of significant to the Greek American community including the heated Macedonia name dispute between Greece and the Former Yugoslav Republic of Macedonia, and the ongoing Cyprus issue.

The Archbishop closed the event with a “beautiful blessing” from the biblical book of Numbers 6:24-26. “May God bless you and keep you; may the Lord shine His face upon you and be merciful to you, may He lift His countenance upon you and give you peace.” His words were met with enthusiastic cheers from the crowd.

The Huge Rally "Macedonia is Greece" in NY