We support Russia, US and EU cooperation to stop the war in Syria, stated President of Republic Prokopis Pavlopoulos to Russian Foreign Minister Sergey Lavrov whom he received at the presidential mansion on Wednesday.

The cooperation proves that the three major forces are the guarantee for the world, said Pavlopoulos.

President Pavlopoulos addressing Lavrov said that the war in Syria and the refugees issue should stop immediately on humanitarian conditions and noted that it is a situation that affects the whole world because it has global repercussions. Referring to terrorism his said that we should behave to them as they deserve, namely as members of criminal organisations that commit crimes against humanity.

He made a special reference to the issue of cooperation among Russia, US and EU, which, as he said, must be effective because this will send the message that in major and important issues that refer to the global peace these three powers guarantee the peace. 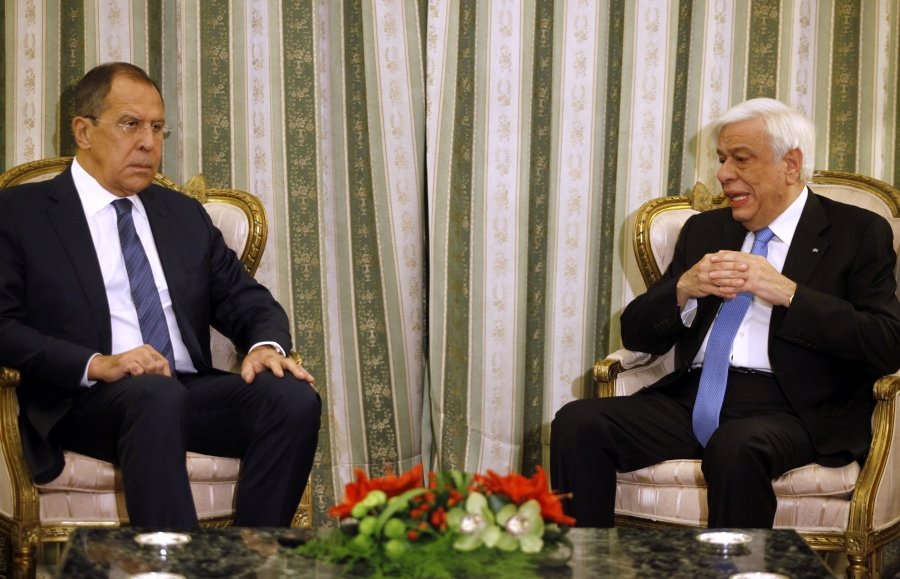 Referring to the Cyprus issue, Pavlopoulos thanked Lavrov for Russia's support for solution which he called imperative.

On his part the head of the Russian diplomacy thanked President Pavlopoulos for the warm welcome and conveyed President Putin's warm regards and expressed Russia's satisfaction over the rich programme of Greece-Russia and Russia-Greece year 2016 that is still in progress.

Referring to the conditions in Syria, Lavrov reminded Russia's stance at the start of the so-called Arab Spring noting that “we made a plea for no changes in regimes but for a political dialogue among all the nations and all the religions in Egypt, Libya and Syria and we are pleased that in Egypt, not of course without problems, the situation is stabilised and we support this course.

He said that there is almost no state in Libya. We must re-create it and the UN is taking care of it and Russia supports this procedures because Russia can accept that Libya will be a 'black hole' through which many migrants from Africa to Europe pass.

On Syria, Lavrov expressed the hope that “our partners will reach the right conclusions in Syria and all of us aim to a fair cooperation and wish for political procedure with the participation of the government, the opposition forces and the people of Syria will decide for their own fate.

Referring to UN Security Council's resolution that describes the approaches towards the solution of Syria's issue, Lavrov underlined that whoever wants to be part of this settlement should cut every relation with terrorists and reminded his US counterpart John Kerry's reference to the specific issue underlining that “a year has passed and we are still waiting for these words to become a reality”. He also noted that some 'sabotage' the political solution against UN Security Council's resolutions and expressed his certainty that if the UN resolutions were fairly implemented then the conditions could change and become much better.

On the Cyprus issue, Lavrov said that and in this case we can't find a solution because there are some that do not want this kind of settlement adding that we do not accept external pressure to set deadlines.

He also underlined that “undoubtedly the Greek-Cypriots and the Turkish-Cypriots must agree”, adding that the UN has set the framework of this agreement regarding the sovereignty, the issues of guarantees and property.

In this context, he said, we will contribute according to the UN Security Council's resolutions and safeguard that there will not be any derogations on this course within the framework of the resolutions.